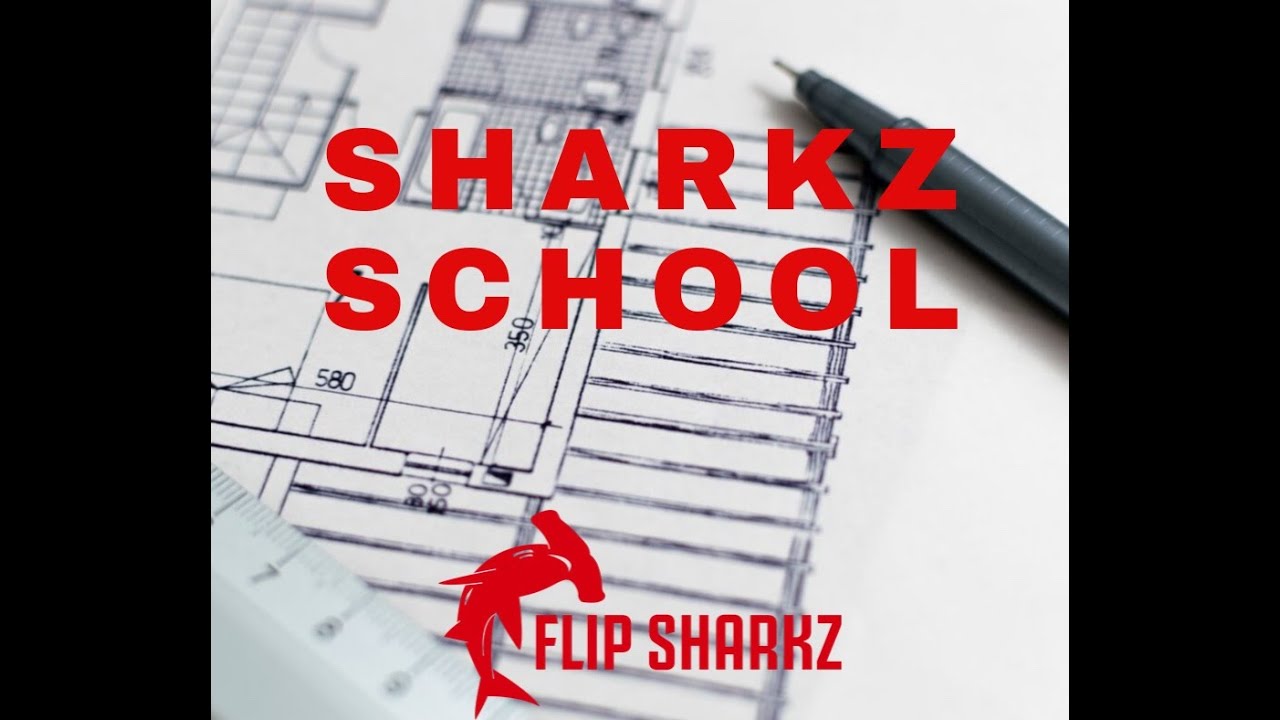 Ed: Hey everybody, it’s Ed at Flip Sharks here. We are starting a series called SHARKZ SCHOOL. Hey, we got a house I just want to run through and maybe do a three or four part house inspection, kind of like a pre-purchase inspection. I know everybody that’s rehabbing and flipping houses, we’re going to do inspections a little bit differently based on funding. So unlike a conventional retail sale where you have lender requirements, when we rehab a house, you guys are typically buying with cash, hard money, private money. So the inspection is going to be a little bit different because we’re picking up these houses at a pretty good discount. So this property here I wanted to use as an example and maybe do, like I said, three or four parts, interior, exterior, under the house, foundation, stem wall, and a bathroom, kitchen, maybe four parts of inspection. But here’s a perfect example.

The house looks pretty nice. It’s a fairly new house, 1999, 2000. So you look in a house like this and you think, Oh shoot, what does it really need? Right? Well, the purpose of this inspection that we’re doing here and why I chose this house for a number of really good reasons is it looks great but that’s where the story ends as far as the beauty part. The house is in really, really poor shape. The owner is so far upside down on this property there’s really not much he’s probably going to be able to do with it shy of a short sale. I mean, he’s leveraged very deep in it.

But I wanted to show you on video one here the exterior inspection. Like I said, the house looks really, really good. I want to go over and you can see there’s a lot of moisture damage. Every state is different, but pretty much in Oregon we’re going to need to have flashing above the windows and the doors. So we got flashing here. It’s going to help prevent water from flowing down through. Nothing in his house had been done right. No flashing. And, as you see, as we get down below, we’ve got LP type siding here. Like I said, this house was built in late nineties. Not sure exactly the specific brand, but we also have a deck that’s butted up to the south facing exterior wall here. And, again, there’s no flashing here. There’s no drainage space. Every builder’s got their own specific way that they’re going to deal with this. But what’s great or actually good for us, but bad for the owner about this house, is there’s massive damage, not only interior, but we’re getting into the structural part as well because the damage has been so prolonged.

That being said, let me go down below underneath the deck and this is an awesome house. I mean, really, don’t get me wrong, it’s a four bedroom, three bath house, a great custom looking house here, kind of a Northern California. And we’re looking at this one possibly to lease for awhile. After we started digging into it finding out that the owner is in a horrible situation, it kind of left us with not too many options. But I wanted to go through here and look and point out a few things. You can see there’s pretty much gaps. The siding has expanded and contracted and it’s pulling off the house. Everything’s kind of bent out of shape, bowed. We have mushrooms. We got mushrooms growing out of the house on the siding. We can literally stick our finger here, you can see this. Can you stick your finger down into the wall, it’s just horrible.

Walk underneath here, you can see where we have the deck, the deck coming up, where it mounts to the house. This is all over the house. Granted, this is a south facing lawn. It’s going to take most of the heat and the moisture and the rain, but this is just poor siding, poor flashing. No flashing at all for where the deck meets up to the house. Expansion and contraction. You can see we have just massive joints, and this is a half an inch, 12,13 millimeters, and we have no rain flashing between the joints like we would normally do in Oregon with wind-driven rains, with a hardy siding or whatnot. You can see, look at these pictures. I mean it’s just horrible.

Now we’re on the north side. So you can see this is a great house, right? I mean, it looks fantastic. It’s a custom built house. It’s beautiful. Just unfortunate has not been maintained. And as you will see from video two, three, possibly four, the quality is absolutely horrible. So these are the things that you want to keep in mind when you’re picking up a house to rehab. Not only get your contractor out here to look at the house thoroughly, find any structural damages that may be. Look, we even have all sorts of roof, tree debris, needles and everything up there damming up. So we have water damage in the house as well. And you’ll see that in the next upcoming videos.

So get your contractor out here if you’re not real comfortable with doing a completely thorough inspection because these are the hidden costs that you may not see. But when you go and rehab the house and go to put it on the market for retail price, you’re going to have to disclose stuff that you find and it’s going to cost a big time with concessions and whatnot. So it can just, I guess, flat out take the profit out of your job.

So, again, this is video one in a series that Dan and I are doing, four parts. So thanks. This is, again, Ed at Flip Sharks and our phone number is 541-780-2424. You can log onto flipsharks.come and check out where we’re doing.

The Flip Sharkz have been a tremendous help, offering invaluable advice and insight along our journey to rehab our project.  They structured a plan for us when we stalled out and helped turn around what was a black hole into a profitable flip. Ed and Dan have been a pleasure to work with. Thank You!

Best decision for our family.

“Even though I did not decide to sell my house in Eugene, we found working with Dan & Ed at Flip Sharkz to be a pleasure and very informative. He helped us along and gave us solutions that enabled us to make the best decision for our family.”

Ed & Dan and the team helped us achieve our goals. His knowledge and experience is head and shoulders above other house buyers.

I found The Flip Sharkz to buy my house, the owner Dan and Ed are very nice to work with. This company has been great at what they do. The team is great at communicating with their customers and they even offered to help with moving when needed.

Up Front And Honest

Ed was very helpful and professional. He explained the process and the ups and downs of options available. He is up front and honest and I appreciated his visit to the property and information he provided to help us make informed decisions. I wish him the best in his endeavors.